It's been a great weekend already. I got to go with a bunch of guys from work up to central Missouri for some outdoor fun. We got drawn for the HaHa Tonka special hunt. I wasn't going to hunt but I still wanted to get out with the guys and enjoy their company. We were successful. Had a blast with them. We went squirrel hunting on Friday. I was the only one to get any. Got three and lost one in a old snag. They got up Sat morning to go hunting and I got up and went trout fishing a Bennett Springs. The river was in great shape and the fish were plentiful. Met Marshall and Mike there. It was great to see them. Met another rod builder from Nixa. Really nice guy and his friends also. The weather was cold but we were bound and determined to fish. It really wasn't that bad but it did start getting colder!! A lot colder!! We had a great time fishing and catching!! I decided to leave about 10:30 and head to the house and see my girls. I was really missing them!! It's great to get away but there is no place like home!!!!!! Oh yea!! We stayed in a really nice place on Niangua River called Niangua Campground. Really a great place to go. The cabins were really nice for a bunch of guys. Price was right also!! I've got rods to build and girls to hug so we'll see you later. Tight lines!!!
Posted by Mark Prewitt at 1:41 PM No comments:

Sorry it's been so long but here it goes. I've been really busy! REALLY BUSY!!! The blanks are moving and the rods are moving even faster!! I sent a bunch of blanks to So Toyota in Japan and blanks to France and Italy and Argentina and Rods to England and Australia and soon to Brazil and a bunch in the US. I'm very blessed!! I did get to go to Roaring River on opening day of Catch and Release and caught a bunch of fish. The big boys were no where to be found. Today the 26th. Marshall and I went down to RR even tho it was 24 when I left the house this morning. Luckly the wind wasn't blowing and the cold didn't cut to bad. The killer worm was really doing great. I had a tip about another fly that my buddy Larry told me about and decited to give it a run and WOW!! I caught a fish on the first 5 casts!!! The 6th cast was a little to long in the back cast and I had to tie on again. I caught about 25 fish in a hour. Sorry I promased that I wouldn't tell what he had told me. I did get a picture of a grandpa that caught a nice 8lb fish. I'll try and add a picture.
I'm still building like crazy and loving every minute of it!!! I hope everyone had a great Thanksgiving!!!! Tight lines!!!!
Posted by Mark Prewitt at 7:00 PM No comments:

They are here findly!!! The best 1wt and 2wt on the market!! These are the real thing!!! Get your order in now. They are selling fast. I'm going to have to order some more 7'6" 4wt blanks already! The custom rods are selling great also!! I'm also shipping a bunch to Europe!! RDP is going strong!!! and so are my blanks!!! Tight lines!!!
Posted by Mark Prewitt at 7:53 PM No comments: 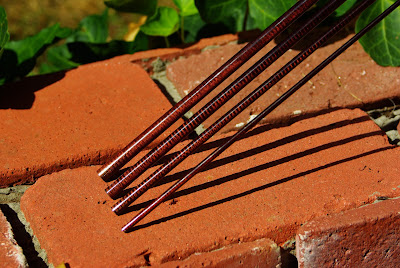 Well the new blanks are in and moving! Yea!!! I'm so pleased with the quality of these babies!! They are straight and the finish is great! But the feel is even better!!!! Yea!!!!! My brother took my 1wt someone call the fishing police!! Thanks for coming by! Tight lines. Leave me some feed back!
Posted by Mark Prewitt at 6:11 PM No comments:

Catch them and let them live!!!
Posted by Mark Prewitt at 8:15 PM No comments:

I did get to go hiking in Colorado in June. It was another great time. We camped and hiked in the Lost Creek Wilderness area again. There was 7 of us. I got to spend time taking pictures and Brook trout fishing. Sweet time!!
Posted by Mark Prewitt at 4:45 AM No comments:

Yes everyone you read the title correctly! I've decided to start my own line of blanks!! I've been working with a group that does really great designs and one of the guys was a former designer for St Croix. The blanks will have the Tiger Eye finish and will be the full flex IM6 graphite with a little sweetner added in. The sweetner is a small amount of boron. The boron will add another step in touch! You will be able to feel the fish think about biting your fly. You'll have to learn to wait before setting the hook so the fish has the fly in his mouth first. "sounded good didn't it" Now for more good news. I'm adding a 7'6" 4pc 1wt!! I'll also have a 2wt and a 3wt and a 4wt in the 7'6". I'll have a 6' and a 6'6" and a 7' 2wt in the 4pc also. I'm going to have 3wt, 4wt and 5wt in the 9' rods also. I really want to be a leader in the smaller rod market. I'll still be building the custom rods. I'll have to up my prices a little to cover the new blanks but $15.00 will not be bad. The blanks will run between $55 and $65 and you will get your moneys worth. It will be later in the year before we see them. I'm very excited to do this step. I hope you will be also. Just think! A 1wt that you can afford!! I'll keep you posted!! Tight lines.!!!!
Posted by Mark Prewitt at 8:18 PM No comments:

Hey,
I hadn't told you about my birthday trip with Marshall. I had a blast!! I meet Marshall at 7 am at the lodge and we went up to zone 1 to start. We didn't make the whistle because we were talking so much. It didn't matter. I got rigged up first and out in the river I went. It was a cool morning and a little mist was going. The first fish was a nice one. A fat 2 1/2lb rainbow. Fought really great!! Nice start to the day! I was using the killer worm and it didn't let me down! I caught fish everywhere I went! Went below the bridge in the rapids and caught about 10 fish really quick. About 11 we decided to go play some golf! I hadn't played in about 2 years. I hit the ball pretty good for the most part. Of course Marshall always hits it good! I had a birdy and finished up 5 over for 9 holes. I was proud! Marshall played much better. Lunk! It was really great to get to spend most of the day with him. I then headed home. I got home in time to go with Michelle to pick up the girls at school. We went over to Hog Wild and had dinner! It was a man's day to remember!! I went to bed early! I was one tired boy!!

I shipped a rod to Brazil a couple weeks ago. He got it and loved it! I shipped one the same day to Canada and it's still in customs. I don't get the customs deal! Had a lot of inquiries and a few sales. Kinda slow for the most part. I've been thinking about having my own line of blanks made. I've been talking with people all over the world trying to find someone that will do the best job with what I want. I'm leaning toward and manufacture here in the states. I would rather have every thing built in America. That's very important to me. I'll keep you updated!!
Get your kids out fishing!! It will be the hardest day of work for the biggest reward! Tight lines!!!
Posted by Mark Prewitt at 6:55 AM No comments:

Getting ready for spring

Well here we are again. It's March and spring is springing a little. I've been selling a lot of rods in the last couple weeks. I sold one to a guy in Brazil last week!! I've covered about every Continent now.
I'm getting ready to go fishing on my birthday this Wednesday up at Bennett Springs with my buddy Marshall Robb! I'm so excited I can hardly wait. We are going to meet there and fish in the morning and then maybe go play golf in the afternoon!!! SWEET!!! I haven't played golf in two years. I hope my swing hasn't left like my diet!!
I've been thinking real serious lately about expanding my business. Getting my own blanks and selling blanks and reels and complete kits. I'm thinking and sending out inquiries to see what it's going to take. I really think it would do well now because my rod building is doing very well and I think people will trust me. I'll keep you informed. I'll also tell you how the 17th goes!!! Tight lines!!
Posted by Mark Prewitt at 1:22 PM No comments:

Hey!
I went down to Roaring River this afternoon!! It was cold when I got there but I was hot for the water!! The river was up a little and had a small amount of stain to it. I looked around for some lunkers for a little bit and could only find one and when I cast anywhere around him you would have thought that I was throwing a stick of dynamite in the water. Gone in a flash!!!!!!! I then decided to catch some fish. I started with old faithful "The Killer Worm" Well it sounds dramatic anyway!! I started fishing about noon and fished till about 3:00 and had a ball! I caught about 30 fish in all. I walked a lot and covered most of the river just to see where the fish were. They have done some work on the pools and I don't see what they are trying to do but what ever. The rod sales are steady and I even got a guy from Malaysia that is wanting a rod! I've been getting a lot of return customers lately and that really makes me feel good about the way I build the rods. I did meet a nice guy from Aurora today that I had talked to before and told him about the Killer Worm. Hope everyone is keeping their line wet!! Tight lines!!
Posted by Mark Prewitt at 4:11 PM No comments: 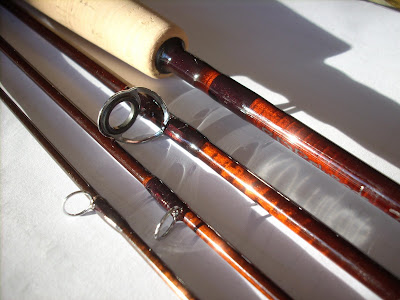 Long time no see!! I had a great year in 09 for rod sales and would like to thank everyone!! I sold about 150 rods. Lots of return customers!! I shipped about 25 or more over seas. My time fishing wasn't that good but spending time with my family was priceless!!! The fish will still be there for me to enjoy in the years to come and my girls are growing up fast and I don't want to miss a moment! I'm looking to have another great year and looking forward to meeting a lot of new frends!! I hope everyone has a great 2010!!!
Posted by Mark Prewitt at 7:07 AM No comments: