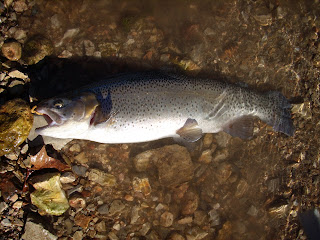 Well catch and release season finely opened last Friday. I had a great day to start. My first fish was a beautiful 5lb rainbow! I caught about 40fish in 4 hours and 7 of them were between 2lbs and 4lbs. Beautiful day weather wise. I used the Killer worm all day. This Friday I went down after I got off work at 11and got to fish a couple hours. Caught 21fish and had one 3lb and one 4lb fish. Met up with Gary Bates and got to see him land a nice 3lb fish. Last Friday I got to net a sweet 8lb rainbow for a gentalman from Pittsburg KS. He said that he had been fishing RR for 41years and findly caught a 3lb fish last summer. Well you beat that one by a ways!! My brother took my dad down last Monday morning and he said he stopped counting after 30fish. Killer worm is in deed a KILLER!!!! I'm posting a picture of one of the nice rainbows that I caught.
Posted by Mark Prewitt at 9:07 PM